George Eliot John (or David) Johnasson, was born in London on 4 February 1863 and was circumcised at 149 Sloane St, Chelsea by Rabbi Asher Ash, on 25th February – somewhat later than the usual seventh day following a birth. He was the only son of [Moses] John Johnasson and his Belgian born wife, Mathilde, and grandson of David Jonassohn of Usworth Hall Durham.

There may have been other causes for the delay, but the late circumcision could suggest the baby was rather sickly? Certainly, the child was to die on 21st February 1874, shortly after his tenth birthday. Evidently, a much loved child, the stone erected to his memory in the Balls Pond Road testifies to his “Gentle Spirit” 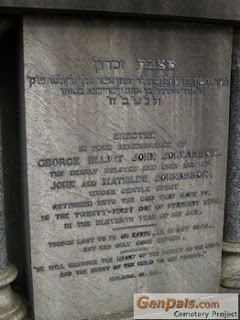 Some time between her death and 1890, John Johnasson remarried Alice, Belgian born like his 1st wife. No record of the marriage has been found; their daughter, Gladys Virginia was born Kensington Sep qtr 1890.

And it is around this time, in March 1889 that that John Johnasson made a request to the West London Synagogue to have his son disinterred for reburial in Kensal Green Cemetery. According to the report in the Jewish Chronicle, the request was refused as “being contrary to Jewish principles” [JC MARCH 29 1889 (Page:8)].

What prompted John Johnasson to make such am unusual and dramatic request? After all, the child was the grandson of a representative to the Board of British Deputies and Kensal Green Cemetery, whilst apparently inter or non-denominational, was not a consecrated Jewish burial place. For a father to voluntarily disturb the last resting place of his only beloved son, it must have been something very powerful.

We know little about either of John’s wives; Mathilde born Antwerp circa 1838, died Paris 19th March 1887 and Alice V born Antwerp 1864 died Kensington Mar qtr 1933 and if anyone has any information regarding either of them, or the burial place of John Johnasson died Newcastle upon Tyne Jun Qtr 1907 do please contact us at GenPals.com
ALS