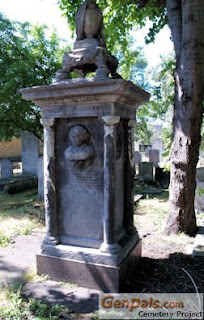 When we first visited Brady Street Jewish Cemetery back in May 2007 we took photos of the memorial to Miriam Levy, a rare, perhaps unique, example of a Jewish memorial with a bust of a woman. This, presumably is an actual likeness of Miriam, who has been described as a welfare worker who opened the first soup kitchens in the East End.

Unfortunately our original photos were not especially clear; it was a very sunny day and the light and shade made reading the worn inscription almost impossible. So when we heard that Brady was to be opened for a day in April ’09 we jumped at the chance of a return visit, eager to finally be able to read the full inscription. Well, hopeful at any rate!

Brady Street is normally locked and the visit was made possible by Babs, a British-Jewry member, who lives in Australia and had found the tombstone of her 5 x great-grandfather, Nathan Raphael (1726 – 21 Sep 1808) on GenPals website.

On her visit to Brady in 2008, she had been unable to find the tombstone so, when the opportunity to visit London arose in April ’09, Babs contacted the United Synagogue and organised for the cemetery to be opened.  Here is an extract from her marvellous family newsletter:

… the morning of Sunday, 19th April 2009, was set for a reunion of some distant cousins at the grave of their common ancestor – just over 200 years after his death! I suddenly became very nervous, what if I still couldn’t find the grave? I anxiously re-checked Gaby’s instructions and downloaded pictures of the tombstones she said were positioned either side of Nathan’s. Both these tombstones were quite distinctive, with relatively clear inscriptions. I felt reassured; surely I had enough information to ensure success this time round. At the very least, there were several other graves of family members to visit I told myself while trying not to hyper-ventilate.

….. our group decided it might be quicker to split up and search separately. It was not long thereafter that my eagle-eyed husband triumphantly announced “I’ve found it!” As one, my newly-met cousins and I rushed to the scene. The tombstones on either side, we all agreed, clearly matched those identified by Gaby as Nathan’s “neighbours”.

Sunday 19th April was a truly memorable day for me too, it was an absolute pleasure to meet Babs and know that we had helped her locate the burial place of her ancestor and especially to walk around the cemetery seeing descendants visiting the graves of their ancestors. I fully understand the need to keep the cemetery closed but seeing several groups of families paying their respects to the those that died many years ago was a wonderful thing: how long has it been since these graves have been visited by family members?

Babs’ visit was particularly special, as she had brought some polished stones from the Orange region NSW, Australia, where Nathan Raphael’s grandson and patriarch of the Australian branch of the family is buried, to leave as a token of her visit.

Here is a photo (copyright K O’Connor) taken by Babs’ husband, with Babs, and family members John and Julia, the polished stones visible on the top of the tombstone.

My time at Brady was nearly up so we took some photos of Miriam Levy’s memorial from as many angles as possible and this time we were successful: the details of the main inscription are now included on the entry found here. As yet the details of her life and her involvement with the East End soup kitchens elude us.