Rivka Goldblatt of Jewishfamilyresearch has helped us by reading some Hebrew inscriptions, here she explains how she did it. We, at CemeteryScribes, are very grateful for her assistance.

Gravestones are a treasure chest of information for the genealogist. Ashkenazic stones will often contain not only the person’s Hebrew name, but also the father’s name and whether the deceased was a Cohen or Levite. It also gives the date of death. Sephardic stones don’t usually have the father’s name, but they do have the surname of the deceased.

Gravestones can tell you where a person lived and died. They can name a spouse, give an age at death, and tell you what your ancestor did for a living. Yet they often are weatherbeaten and hard to read, especially from a photograph. In this article, I will examine one such eroded tombstone – and find out who is buried here! 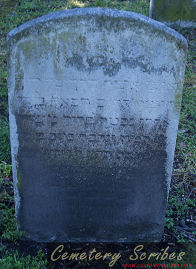 Before anything, I can see a few details. The name Refael is clearly visible. That tells us that this is a male, and that either he or his father, is named Refael.

On closer examination, the first word is ‘Ish’ – ‘A man’. The few words that follow are presumably enumerating the man’s good qualities, but they can’t be read easily. With a bit of guessing, I think it says ‘ Asher holach bederech hayoshor’ – ‘who went on the straight path’ i.e., was honest.

On the second line, after the name ‘Refael’ is the letters Beit and Reish. This abbreviation means ‘son of Mr.’. So we now know that the man buried here is an adult male (as seen from the word ‘Ish’- ‘A man’, as opposed to ‘Yeled’ – ‘Child’ or ‘Bachur’ – ‘Young man’) called Refael.

Continuing to the third line, the name ‘Aharon’ is visible, giving us the father’s name. The next word is ‘Niftar’ – which means, who died.

The inscription so far reads: ‘A man who went on the straight path, …. Refael son of Mr. Aharon, who died …….’ .
So when did Refael die? The next word tells us, but it isn’t clear:

This is obviously a four letter word. The first letter could be either Beit, Kaf, or Peh. The second and fourth letter is the same, and the middle letter is either a Yud or a Vav. The second and fourth letters look most like a Lamed – which would give us the word ‘Beleil’ (Beit Lamed Yud Lamed) – ‘on the night of’. This is a common word on Hebrew graves, with the death written as either ‘Beleil’ or ‘Bayom’ – on the day of. Since Hebrew days begin the night before, this can make a difference when computing what day it was in the secular date – the night of 4th of Tevet 5776 was the 15th December 2015, whilst the day of 4th of Tevet 5776 was the 16th December 2015.

So Refael son of Aharon died at night. The next two words tell us the day of the week, though they are still unclear. On the fourth line we see a month – ‘Tammuz’. The date of the month is the first character(s) on the fourth line, but are still illegible. The line continues with ‘and was buried on the Monday’. So we know he died sometime before Monday. Let’s go back to the line before to see if that clue helps us!

The first thing I see is that it is two words, or rather, one letter and then a short word. The letter initially looks like a Tet, but since that would not make sense, I look for another letter that looks similar to a Tet in shape. The closest is a Mem – that would make sense as an abbreviation for ‘Motzai’, which literally means ‘the going out of’. I can only read the first letter of the second word – it is a Shin. My guess is that these words spell ‘Motzai Shabbat’ – or, Saturday night.

Now for the exact date. We know that he died in the month of Tammuz, but what day? The first characters at the beginning of the fourth line. Let’s take a closer look.

Firstly, it is two characters. There is too much space for only one character. So what are they? The first one is easy. It could only be a Kaf or a Yud, either 10 or 20. Though Jewish dates go through to 30, the number 30 is represented by a single character, Lamed.

Of the two choices, it is obviously a Kaf. What is the second character? Well, we only have 9 characters to choose from. Of those, it can be a Beit, Gimmel, Heh and Chet. The stone is to eroded to see which one of these it is, but we now know that Refael son of Aharon died on Saturday night, 22nd OR 23rd OR 25th OR 28th of Tammuz, and was buried on Monday. The end of the fourth line and beginning of the fifth line gives Monday’s date, but is impossible to read. We can see, again, that the date is in the 20’s.
The bottom of this gravestone is almost unreadable – but contains one of the most important parts – the year. If we would be unable to read the year, we could still make a guess based on nearby tombstones, but we do want to try to read the rest.

So, on the fifth line, the first (erased) word is presumably Tammuz. The next word is ‘Bishnas’ – ‘in the year’. I could read this word fairly easily, because I was expecting it.

2 comments for “How to read a gravestone”