In a recent article in the Jewish Chronicle ‘I didn’t want a traditional headstone for my father’s grave. But what was the alternative?’ Stephen Games describes how he commissioned a unique tombstone for his father, in strict conformation with the four prerequisites imposed by the United Synagogue Burial Society
We do not know how long these very particular requirements have been in force but they have clearly evolved over time, since the first post-re-admission burials in the mid 17th Century.
Most early inscriptions were exclusively in Hebrew see here. 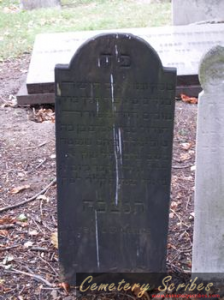 On the other hand, many19th Century stones in cemeteries attached to the Western Synagogue  carry no Hebrew example 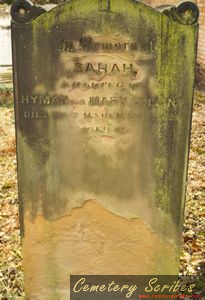 As, not surprisingly, is also the case with many stones in Reform cemeteries such as Kingsbury (Balls Pond Road) and Hoop Lane, and the Liberal Cemetery at Willesden, carry no Hebrew.
However, contrary to the present day stipulations, several stones in the United Synagogue Cemetery at Willesden do not carry Hebrew Patronymics: for example, the stones for Henry Levi, Henry Lewis and Henriette Raphael, and Nathaniel and Rose Barkman.  Fortunately for today’s family historians, these individuals either had family names that were relatively uncommon, or they could be fairly easily identified through other means. But, without a Hebrew patronymic, future researchers might find an Abraham Jacobs or an Isaac Levy less easy to distinguish.
The practice of  omitting Hebrew patronymics was prevalent as recently as 1937/8, where the stones of my own great-grandparents carry the Hebrew date and the valedictory “May his/her soul be bound up in the bond of eternal life” (written in English characters) but no patronymic.