Half-a-day for the photography – then comes the real work…..

It’s just over 4 months since we visited The Balls Pond Road Cemetery and we’ve been working flat out on processing the photos ever since. So why do we still have three times as many on our “to-do” list, as we have completed and uploaded onto the site? Well, some of that is down to the mundane demands of everyday living – like going to work, ferrying kids to school and old aunties to hospital, completing the tax returns and booking the car in for a service. In other words, the minutiae of life getting in the way of the serious business to which we, and this site are dedicated

Sometimes we may get caught up in a particular story that leads us down so many varied and interesting byways that, if we didn’t call a self-imposed halt to our researches, they could be in danger of developing into a doctoral thesis.

With well over 2700 stones on site, we can now link people across centuries, cemeteries, countries and continents. We haven’t yet transcribed Jacob Magnus died 1888 and buried in Balls Pond Road, but the links to him will take us to his distant cousins, Nathan Joseph Magnus, and Judith [Gitele} Joseph Magnus, both buried in Brady Street, and will connect to several other families on the way. The research could be extensive and the links will certainly be many and complex: it will be a fine calculation as to how much time we allow ourselves to spend on this one family

And, sometimes, we just get stuck. For several hours now I’ve been peering at a picture of a perfectly upright, undamaged stone with not a single visible character to denote who it memorialises. And, yes, I’ve tried every trick in the PhotoShop handbook – converting to negative, playing with the brightness and contrast. You name it, I’ve tried it. The stone refuses to give up its secrets. 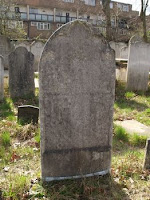 With luck, we may be able to match it to one of the names recorded on the excellent Balls Pond Road Burial Ground site but we feel we would be short-changing researchers across the world, who may have a personal interest in this individual, if we didn’t work overtime to uncover at least a trace of the original inscription. So another day passes and the unprocessed pile of photographs in the “in-tray” is still way higher than the few completed and ready to upload onto the site. We had hoped to have Balls Pond completed by the end of August – but, like an ill-functioning Government Department, I don’t see us meeting our targets! With luck we’ll be finished by the end of this year – that is, the secular one that finishes 31st December 2009, not the Hebrew one that finishes mid September!
ALS