We frequently receive comments from excited researchers who have found the tombstone of their great great ancestor on the CemeteryScribes web site.

And we regularly get comments from our family and friends asking why we do it: why we spend endless hours photographing, cataloguing, researching and inputting all these tombstones. And, sometimes, we wonder why, too!

It’s actually quite hard to give a simple explanation and keep friends’/family’s attention while doing so! It’s a mixture of so many reasons but, if pushed, we would probably say that our prime motivation is our wish to keep for future generations the information stored on the tombstones   And, a close second to that, trying, through our photographs, to capture the atmosphere of the cemeteries in which our ancestors were buried; to record the changes over time in the forms and materials of the tombstones – from box tombs and pillars to simple headstones; the variety of caligraphy – from Gothic flourishes to the plainest of typefaces; and, beyond the basic information of names and dates, to show the variety of language and sentiment, from the most flowery of eulogies to the most simple and telling farewells.

But, if we ever needed reminding, if ever the mountain of unprocessed material threatened to overwhelm us, we would only have to look at these photographs to re-ignite our enthusiasm and spur us on to complete our self-imposed task.

To the left is an aerial photo of the Novo Cemetery in Mile End as it looked in 1945 and, alongside it, the present day Novo cemetery.  The third, composite, picture brings into stark focus exactly how much has been lost. 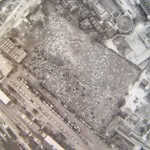 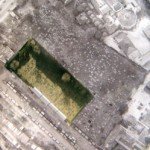 The 1945 photo with the present day Novo cemetery in colour 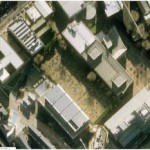 Above is an aerial photo of the Novo Cemetery in Mile End as it looked in 1945 and, alongside it, the present day Novo cemetery.  The third, composite, picture brings into stark focus exactly how much has been lost.

In 1972 the site was bought by Queen Mary College and the oldest parts of the cemetery were cleared.After well over 200 years, this historic site was reduced to less than a third and an enormous amount of information lost. The remains were moved to Brentwood where initially there were plaques to remember the 5,000 that were moved. The plaques are no longer there.It is not the only ‘Lost cemetery’ Hoxton Jewish Cemetery and Gloucester to name a couple were also sold and each no doubt with good reason but, nevertheless, they are lost.

Worse still is the fact that no one seems to have taken photos before these cemeteries were cleared!

Compulsory purchase is not the only threat to our history, tombstones erode over the years and become  illegible losing the inscriptions.  Let us, at the very least, record them before it is too late.

For further information on Spanish and Portuguese cemeteries, see http://www.sandp.org/archives.htm The Novo cemetery burial register (Bevis Marks Records Part VI ) contains about 10,000 entries (about 40% of them children) between 1733 and 1918.