We have Harry G De Groot who died in 1872 and was buried at West Ham Jewish cemetery, on CemeteryScribes and until very recently had been unable to find anything more about him. He did not seem to appear in UK census.

His death was registered as Henry De Groot, the tombstone says Harry G De Groot but neither name was successful when searching the census. 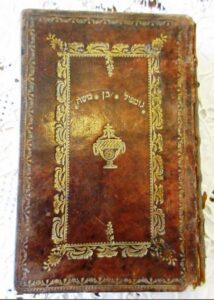 From the inscription it seems he was a Chazan or of some other communal capacity in Dublin so it’s a nice Anglo-Judaica piece too.”

The Hebrew name was the same as that shown on the tombstone inscription, so it would seem that this Prayer book belonged to the same Harry De Groot but of course some further information was required.

‘Our’ Harry De Groot is shown to be ‘formerly of 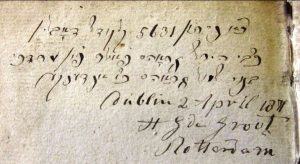 Rotterdam’ on the tombstone inscription, but there is no mention of Dublin.

Next we checked  ‘The Jewish Victorian Genealogical Information from the Jewish Newspapers 1871 – 1880’ by Doreen Berger and there was the announcement of Sarah De Groot, wife of Harry De Groot, death. Sarah died in Dublin in 1871!

It would be good to think the book finds it way back to the family. While, with the seller’s permission, we are publishing a couple of photos of the Prayer Book so others can see it once the auction has ended.