Is this the smallest Jewish place of burial in the UK?

In the course of our travels around the UK, we have visited many Anglo-Jewish burial grounds, from the peaceful walled historic London cemeteries in Aldernery Road and Brady Street  to the sloping, depleted expanse of West Ham, but nothing compares with the elegant memorial to one of Anglo-Jewry’s foremost personages. Sir Moses Montefiore and his wife Judith lie, side by side, in simple granite covered tombs, enclosed in an elegant domed mausoleum, erected in accordance with Sir Moses wishes, a few short paces from the Mocatta designed private Synagogue 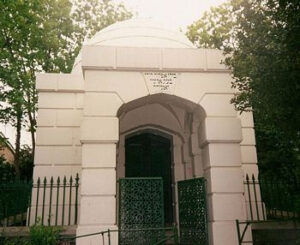 Both the Mausoleum and the Synagogue are now maintained by the Montefiore Endowment, a charitable company limited by guarantee. The company is run by a board of directors (trustees) assisted by an advisory Council

Following a rather last minute decision to spend a day in Ramsgate, we hardly expected that a visit could be arranged, but The Endowment Secretary  could not have been more helpful and on Wednesday 9 October – possibly the last summer day of 2013 – three of us spent a most enjoyable hour in the company of the Beadle, a genial guide who wore his deep knowledge of the buildings very lightly.

Although religious minorities in Britain did not achieve full emancipation until the mid/late-19th century, it is a measure of the freedoms that Jews already enjoyed in Britain – compared with the ghettoes and shtetls of much of Europe – that Sir Moses Montefiore was able, in 1833, to build a Synagogue on his own land and dwell in a house, whose illustrious owners numbered the young Queen Caroline and a brother of the Duke of Wellington’.

Don’t be put off by guide books which suggest the place is hard to reach. True, the Synagogue and Mausoleum are set in peaceful surroundings, away from traffic, but access is easy and anyone with an interest in Anglo Jewish History or Synagogue architecture should not miss the opportunity to visit these unique buildings.