Taking part in the 1912 Olympics in Stockholm was the son of a salesman, David Henry Jacobs. David was born in 1888 Cardiff, Wales to John and Sarah Jacobs. He was one of at least 6 children.

In 1911 the family were living in London, both John and his son David were working as wardrobe dealers. You have got to wonder whether this helped or hindered David’s training for the Olympics but just over a year later. in his mid twenties, David was Captain of the British men’s 4 x 100 meters spint relay team. 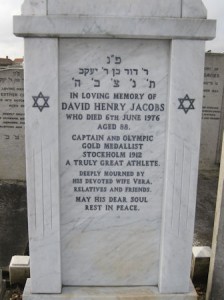