At 20.20 hours on 10 August 1941, an RAF Liberator took off from Ayr Scotland, destination Gander Newfoundland. 20 minutes into its flight, the plane crashed into a ridge on Mullach Buidhe, just North of Goat Fell, the the highest peak on the Isle of Arran, killing all 22 crew and passengers. But these were no ordinary passengers: they were all certified pilots and air crew and their mission was to collect new aircraft and ferry them back to the UK for use in the war effort. With two exceptions, all are buried in Kilbride Old Churchyard, Isle of Arran, under the auspices of the Commonwealth Graves Commission. 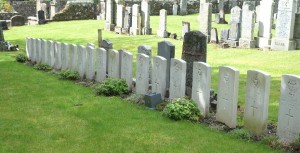 A detailed study of the accident, along with photographs of the crash site and brief biographies of those who perished, can be found at Yorkshire-aircraft.co.uk. With the aid of US Census, Naturalisation and Shipping records we have been able to further flesh out the basic details of Jack Wixen’s peripatetic formative years. in Batum Georgia, on 23rd Sep 1913, to Aron – a confectioner – and Tole (Tillie / Tanya) nee Abromovich. Following the birth of a brother, Isa, in Odessa circa 1917, the family emigrated to Palestine, where another brother, the optimistically named Balfour, was born. Their next journey took them to Marseilles, from where, on 14th October 1922, Aron and Tole and their three sons boarded the SS Canada bound for New York. They finally settled in California where they assumed the name of Wixen. On completing his schooling, Jack trained and served as a pilot and instructor for the Transcontinental and Western Air (TWA) and American Airlines.

Two days before the celebration of their 30th wedding anniversary, Mr. and Mrs. Aron Wixen, who thought they were receiving a congratulatory message from their son in the R. A. F„ were advised that their boy, Captain Jack Wixen, had been one of the 22 victims killed in the crash of a bombing ferry in England. The flier had been a pilot for the American Airlines and the T. W. A., before enlisting in the R. A. F

17 years later. In a curious twist of fate, Aaron Wixen was lucky to survive when the twin engine Western Airlines transport in which he was a passenger, crashed and burned in the California desert. [Spokane Daily Chronicle Feb 14 1958]

Jack Wixen joined the RAF as a ferry pilot four months before his death. and some seven months before the US entered the War, following the bombing of Pearl Harbour. Was it love of flying, a desire to fight the threat of Fascism, or simply ingrained wanderlust, that inspired this move? All we know is that the 7,000 mile odyssey that took the boy, Jacob Vichnenko, from Batum on the Black Sea, to British Mandated Palestine, New York and California and then, on again, to an RAF airbase in Scotland, finally ended in a peaceful Churchyard on the Island of Arran where, far from home and family, Captain Jack Wixen lies alongside his comrades in arms.