We were recently contacted by Alan Isaacs who asked whether we would like copies of  some photos taken at Wolverhampton Jewish Cemetery. Our readers will know that the answer was a resounding “Yes please!”

Alan, whose interests lie in electronics, has a virtual Radio Museum and also provides genealogy research services to some of his customers, kindly sent us the photos which we have now been able to add to CemeteryScribes.com. 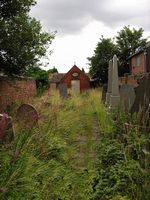 According to an article originally published in the local Wolverhampton paper and repeated in the Jewish Chronicle, the first Jewish person to settle in Wolverhampton was a Mr Harris, who arrived there in 1833, and the first to die was a Mr Aaron. As a result of Mr Aaron’s death the Duke of Cleveland presented the Jewish Community with a piece of ground in Green Lanes in 1851.

So far we have been unable to conclusively establish the identity of Mr Aaron, but it is likely that he was a member of this family.

In 1860 the papers reported on the trial of a couple of grave robbers. Apparently, they had disturbed the grave of Rhoda Wolf, who died on 19 Aug 1858 and was buried 4 days later. There is no record in the death registers of a Rhoda Wolf dying in Wolverhampton but there is, however, a Rose Wolfe who we think was very probably the same individual.

The Wolverhampton entries can be found here.