the personal column of The Staffordshire Sentinel:

Did William Rowley respond to the advertisement?, Or any other members of his family, who can, indeed, be found living in Broom Street in the 1871 Census?   And if so, what was Rebecca hoping to learn? For Ann Rowley was her stepmother and she had known her from a child (1851 census records (Miles Bank, Stoke Upon Trent, Hanley And Shelton RG number: HO107 Piece: 2005 Folio: 40 Page: 22)

Our interest in these people derived from the 1864 Australian marriage Record for Rebecca, daughter of Sampson Goodheim and Rosannah Ensor  to Joseph Levy and our attempts to place Rebecca and her parents within their English context.  The story that emerged was complex and colourful.

The GRO Indexes on Free BMD show that Sampson Goodheim. an immigrant from Germany, was married in Stoke upon Trent in the December quarter of 1838   But who was his bride?  According to various sources she was Hannah or Ann Ensor or Hensor, but no such person is listed in the relevant set of Brides and Grooms.

We finally found her on the Staffordshire BMD website http://www.staffordshirebmd.org.uk/cgi/marrind.cgi

And the same website confirmed that she was the mother of the couple’s three children born in Hanley: Samuel 1839,  Myar (sic) 1843 and Rebecca 1845. But the marriage was turbulent and by 1851 Hannah was no longer living with the family and in 1860 Sampson petitioned for divorce; an earlier petition, which suggested that his wife had contracted a bigamous marriage, having either failed or not been pursued.

From 1851 or earlier, Sampson Goodheim was cohabiting with Ann Rowley, whom he later married and with whom he fathered several more children – a record of this marriage is yet to be found. In October 1861 Hannah Goodheim was charged and with. and acquitted of. the offence of Bigamy and, in the same year, Sampson Goodheim, now living in Manchester, was declared bankrupt. In 1862 Sampson was accused of continuing to trade whilst bankrupt, but the charge was subesquently dropped and, some time after this, Sampson accompanied by his wife, Anne Rowley Goodheim, the three children from his first marriage, plus three more, Sophia, Joseph and Leah, from his second, emigrated to Australia, where two further childen, Solomon and Miriam, were born.

It is not clear whether either of Sampson’s wives  underwent any formal conversion to Judaism, but the family appear to have maintained strong connections to the faith: the two eldest sons, Samuel and Myar were sent to board with the Voorsanger family in Manchester to enable them to attend the new Jewish school, where Samuel was the first to win the coveted position of pupil teacher, and several of the Goodheim children who married in Australia, appear to have chosen Jewish partners

Sampson Goodheim died in Melbourne on 29 April 1872 and was buried in Melbourne General Cemetery Carlton (Section B2 Grave ID 37394 and adjacent to the burial plot of his daughter Sophia who died a few months earlier)  The inscription on his stone reads “My husband, father of Rebecca Levy. Shimson b. Meir”

Ann Rowley Goodheim died on Sunday 22 December 1882 and was also buried In Melbourne General  a stone, subsequently erected by her children describes her as “Channa (wife of Shimson) b. Meir.  Her death was sudden and occurred on the Day of Atonement at the Albert Street Synagogue Melbourne, as recorded in the Melbourne Argus

“A very sudden death occurred during divine service at the Albert street Synagogue last evening. From sunset yesterday until sunset today in the Jewish religion is the Day of Atonement, and one of the strictest fast days in the year. There was a very large congregation, and shortly after the service commenced Mrs Goodheim, of Elgin street, Carlton, who was in the ladies gallery, fell off her seat apparently in a fainting fit.  She was removed as quickly as possible, and Drs Brownleas and Morrison sent for, but on their arrival they found that life was extinct.  The melancholy affair caused a great sensation amongst the congregation, as the deceased lady was well known and highly respected. She has not enjoyed the best health for some little time past, and on entering the Synagogue late evening it was noticed that she appeared rather pale. The deceased was about 55 years of age, and her remains were removed after the service to her late residence….” 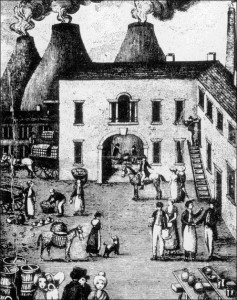 The move to Australia did not entirely resolve Sampson’s financial and marital difficulties, but it was a new start, in a new land, far away from the grime and smoke of English industrial cities  and let us hope that his descendants prospered.